The best way to explore different flavors on a single visit is to take up the golden- triangle tour in India.

This tour covers three important destination of north India, Delhi, Agra and Jaipur. Each of them are situated about the distance of 200-250 km from each other  thus they from a triangle. This tour provides you with huge forts, magnificent, palaces, bustling bazaars as well as rich art and culture of India.

One can opt for a car or train according to the convenience It took hardly 2-3 hours to reach Agra by Yamuna express way. This historical city stands 200km south of new Delhi, on the bank river of Yamuna over three centuries ago ,it was a powerful Mughal capital and most important city of northern India. 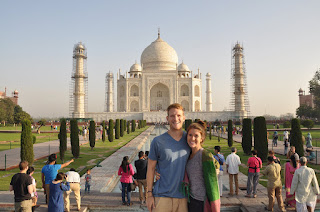 Taj mahal is one of the wonders of the world thus it hardly needs any introduction .It’s spIendor of white marble  is the diminutive of “city” on the banks of river Yamuna .It is the ode to the emperor’s eternal love for his wife .Agra fort built in red stone and declared world heritage site by UNESCO is one of famous sights.  Agra fort was built by Akbar –one of the greatest Mughal emperors. It is beautified by a swath of parkland and gardens ,among the major attraction in the fort is Jahangir’s palace ,moti masjid ,hall of private audience(divan- e-khas) musamman burj,diwan-e-aam,,seesh mahal .Another eye catching monument is itmad-ud-daulah’s tomb which is also known as “Baby Taj”this exquisite tomb is made up of pure white marble and is known for its intricate and elaborate carving. Do not forget to visit one of the finest masterpieces of great Mughal,”sikandra tomb” which is a befitting  monument to the memory of the great king of status ‘Akbar’.
Same day Delhi  tour start from red fort and ends at rajghat .Beside the river Yamuna, red fort is the most spectacular piece of Mughal architecture in Delhi. Must attend the “sound and light show” held in the evening here. Explorer the mehrouli  park which houses many historical monument like qutubminar  ,alai gate ,tombs of iitutmish alauddin khilji and imam zamin.  Lotus  temple is the another land mark in the capital city ,you may move on to visit humayun’s tomb and jama masjid also .Savour pan-India cuisine at dilli hatt and shop at craft bazar ,chandni chowk ,Connaught place and khari bowli.chill at Lodi gardens.

Same day Jaipur tour mesmerizes you with the rich art and culture and home of the most exquisite cuisine in the world .

The magnificent city palace comprises of grand state rooms, interesting museums and decorative gates .It displays historic armoury .Hawa mahal ,and multi windowed palace which is best viewed from siredeori bazaar .while walking between city palace, hawa mahal and the jantar mantar take time to watch the city walls and ornate city gates .Jantar mantar are the series of astronomical instruments used by the mogul’s to predict the future . Amer  fort is one of the most important fortifications in Rajasthan on return from Amer fort stop view to jal mahal constructed as the duck hunting lodge by the king in the middle of lake sagar .
Same day tour package of India golden triangle cities will leave you with unforgettable memories of Indian art and culture.
For More Information Pls visit at us: www.roamidays.com

Posted by Roamidays at 23:17 No comments: